Why method comparison and imprecision protocols are biased

The purpose of a typical clinical laboratory evaluation for an assay is to determine if the assay has adequate performance. What is implied by adequate performance is that the errors are small enough so that clinicians will not make incorrect medical decisions based on assay error.

The typical protocol for a method comparison experiment to assess performance is the split sample protocol, whereby a sample is processed and then divided in two to be analyzed by both systems.

In a protocol to assess imprecision, sufficient sample is processed to provide a pool that is analyzed repeatedly by the system.

Both of these protocols are biased. The reason is that for either the method comparison or imprecision experiment, the same processed sample is being analyzed rather than collecting and processing each sample separately. The opportunity for error due to processing has been excluded in these experiments.

Why does this situation persist? Because another reason – often the main laboratory reason – for performing these evaluations is to answer the question is this new analyzer or method as good as the existing method. In this sense, the protocols are not biased. So I don’t advocate changing the way the protocols are done but one should realize that when one considers the other implied other goal of medical utility for these studies, the protocols are biased. In fact, the implied goal of medical utility is routinely stated as a conclusion of evaluations, such as the ABC assay is acceptable for use in monitoring patients with XYZ.

Detection is important, but not in RPN (Risk Priority Number)

At the Westgard web site, the pros and cons of dropping detection from RPN (severity, probability of occurrence, and probability of detection) are discussed. Rather than comment on an abstract level, here is an example of why I favor not including detection.

Assume potassium is being analyzed with the potential for an erroneously high potassium result to be reported to the clinician. This sets the severity to be the same for all causes of this event. There are many, many potential failure causes which require a ranking to focus on mitigations for the top causes that have unacceptable risk. Since all causes have the same severity, and since I don’t favor using probability of detection, it remains to determine the probability of occurrence for each failure mode.

Potential failure (= error) causes are postulated for each process step, of which there are many process steps in a detailed process map. Let’s consider one process step and one potential error cause. Additional process steps deal with this error.

For each of these process steps, one must estimate the probability of occurrence for a failure cause. Moreover, each process step can have multiple failure causes. For the sample process step, one could perhaps tally the percentage of detected hemolyzed samples. It is important to understand that both the detection and recovery steps can also fail and their probability of occurrence of failure must also be estimated. These potential failure rates would seem to be harder to estimate although each would have as a floor, non cognitive error.

Given all process step failure modes have been ranked in descending order by probability of occurrence, one would consider mitigations for those process step errors with unacceptable risk.

I don’t see how the addition of classifying probability of detection would help.

The majority of errors in the laboratory are not analytical errors but pre- and post-analytical errors. These errors are due to process failures such as using too little sample, analyzing a hemolyzed sample, or failing to withhold results if QC is out.

And now there is new push back about CLSI’s revised document about total error (EP21-A2). The complaint is about EP21 dealing with “pre- and post- analytical error sources, including those which are not due to the test method”. So if a patient is harmed because a clinician made an incorrect medical decision due to an error in the lab test result, who would try to say that the error was not due to the test method (because it was pre- or post- analytical). Crazy, again. Back in 1987, the ADA (American Diabetes Association) came out with a standard for glucose meters, whose goal was for “total error (user plus analytical)”.

Why no Pareto in EP23 is a problem 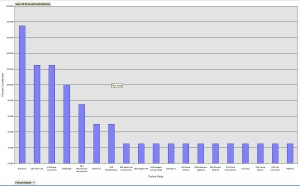 I have previously commented on deficiencies in CLSI’s risk management standard EP23. The word Pareto cannot be found in this document. Here’s why that’s a problem. 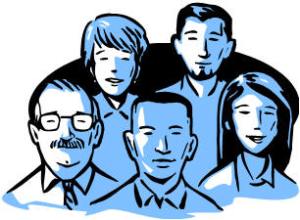 The last entry noted that the NACB (National Academy of Clinical Biochemistry) guidelines for glucose meters (subscription may be required) ignored my Letter (1) and our review article on glucose meter standards (2).

I mention in my critique that the authors of the simulation study neglected to account for random interferences. This is not just to account for large errors. For example, hemoglobin is well known to cause a small interference in glucose meters, which although small adds to the overall variability.